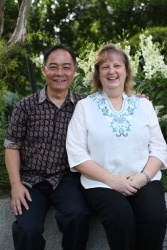 Teck Ming was born in Taiping in 1961 but was raised in Melaka. He has a Master Degree in Counselling from Monash University. He graduated in the top 15% of his class and was awarded the prestigious Golden Key International Honour Society Award. He also graduated with a Master’s Degree in Architectural Engineering majoring in Project Management. He came to Singapore as part of the Singapore Mission Team in 1988. After working as an Engineer, Teck Ming felt called to enter the full time ministry and has served in various roles in the Singapore Church, ranging from working with the Youth to Parents. He is currently serving as Youth Minister, working with pre teens and teens, and their parents. He also does community work by serving as counsellor and family life educator. Teck Ming also has a graduate certificate in Parent Education Leadership Training jointly awarded by Swinburne University, Australia, and the Family Resource Training Centre, Singapore.

Patrice was born in South Carolina, United States in 1963. Her family moved frequently as her father was a pilot with the US Air Force. They finally settled in California where Patrice became a follower of Jesus. She did her university degree at the University of California at Berkeley. In 1988 she moved to Singapore to be a part of the mission team of the Central Christian Church. Patrice has worked along side her husband in the ministry for many years and continues to help lead the Youth Ministry. She is also working with HOPE worldwide (Singapore) focusing on the area of family education and counselling.  Patrice has a graduate certificate in Parent Education Leadership Training jointly awarded by Swinburne University and the Family Resource Training Centre, Singapore. She also has a Master’s Degree in Counselling from Monash University and is a Professional Member of professional Counselling organizations in Singapore, America and Australia.

Patrice works with HOPE ww Singapore / Central Christian Church of Singapore and does counselling with her husband on a volunteering basis.

Married in 1988, Teck Ming and Patrice are the proud parents of three wonderful children.